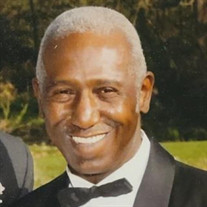 Obituary Gerald Lamont Dickson was born on January 14, 1954 to the union of Eddie Dickson Sr. and Lettie Rose both who proceeded him in death. Gerald was educated in the Detroit Public School system graduating from Mackenzie High School. He furthered his education by attending Wayne State University majoring in Liberal Arts then switching it to Psychology. He didn't finish because he always said that he wanted his "own family". While in high school he met, dated, and married his high school sweetheart Johnnie Mae Scott, who proceeded him in death, and "The Family" began. Gerald accepted Christ as his Lord and Savior and would tell you "I've read the bible from Genesis to Revelations just in my leisure". He was very knowable when it came to teaching and breaking down God's Word often giving reverence to Deacon Brown. Gerald was a faithful member of Mayflower Missionary Baptist Church where he served as an honorary deacon, and superintendent of Sunday school for many years. He sang in the male chorus and was also the audio/visual coordinator for church services and its radio broadcast. He would even often say "I was the janitor too" LOL Gerald started working for the City of Detroit in 1972 in sanitation working his way up to foremen then to supervisor of parks and recreations by the time he retired with over 30 years. He then began working for Reddi Ride Transportation for 10 years until his last retirement in 2016. Gerald was a quiet and reserved man, yet very confident in himself. He had no problem telling you "Oh, my name is Gerald Dickson that's, D I C K S O N. "G" Dickson" Gerald helped where needed, whether it was driving the mothers from church around, or just sitting and talking about life and sharing what he endured throughout his journey. He always gave people a different way of looking at things. Affectionately known to his grandchildren as "Paw Paw", a name given to him by Alan, the name grew, in fact everyone in the neighborhood knew him as such. He told us one time "I went to the gas station and this guy walked up to me and said, "Aye aren't you the 7 Mile grandfather"? And in his response was "Nah man I'm Paw Paw". Besides his family, his favorite past times included reading and collecting comic books. At its highest peak, Gerald collected over ten thousand comics. Working on cars and teaching his daughters how to keep the maintenance on them. Watching cartoons dating back to the 1950's up to the current ones including his all-time favorite The Simpson's. Listening to his cassette tapes of all genres, especially Rock and Roll or "soft rock" as he would put emphasis on, watching YouTube, and mostly enjoying his retirement. Gerald departed this life on October 8, 2021. He leaves to cherish his memory and legacy to his daughters Charlene, Sheila (Douglas) of North Carolina and Lettie. Two brothers Eddie Jr. and Steven. One sister Jacqueline. Three sisters-in-love Lisa, Doris Jean, Henrietta, and Martina of Buffalo New York. Three brothers-in-love Ricky, James, and Jerry of Buffalo New York. Six grandchildren Alan, Mason, Denae, Tiffani, Aaron, and Abigail. One great grandchild SaNiya. One aunt Lessie. God-daughters LaQuita, Katherine, Lucretia, and LaKeisha. A host of nieces, nephews, cousins and friends. Order of Service Musical Prelude Processional Prayer Douglas Humphrey Music Selection It is Well With My Soul Acknowledgements, Cards & Condolences Angelena Dickson-Moore Reflections (3 minutes please) Family and Friends Obituary Reading LaQuita Hunter Music Selection I’m On the Battlefield For My Lord Eulogy Rev. Terry Mincy Recessional Pallbearers Alan Hightower Mason Carter Aaron Humphrey Reginald Scott Colin Dixon Douglas Humphrey Flower Bearers Final Arrangements Entrusted To Clora Funeral Home 5801 East Seven Mile Road Detroit, Michigan Internment Repast Jackson Crematory Immediately following the funeral at Lovelace Hall 17850 Mt. Elliott Detroit, Michigan 48212 Acknowledgement of Appreciation The family of the late Gerald Dickson acknowledges, with sincere appreciation, the many comforting messages, prayers, floral tributes and many other expressions of kindness during our bereavement for our loved one. Thank you.

Obituary Gerald Lamont Dickson was born on January 14, 1954 to the union of Eddie Dickson Sr. and Lettie Rose both who proceeded him in death. Gerald was educated in the Detroit Public School system graduating from Mackenzie High School. He... View Obituary & Service Information

The family of MR. GERALD LAMONT DICKSON created this Life Tributes page to make it easy to share your memories.

A comforting word from you means a lot.

Send flowers to the DICKSON family.